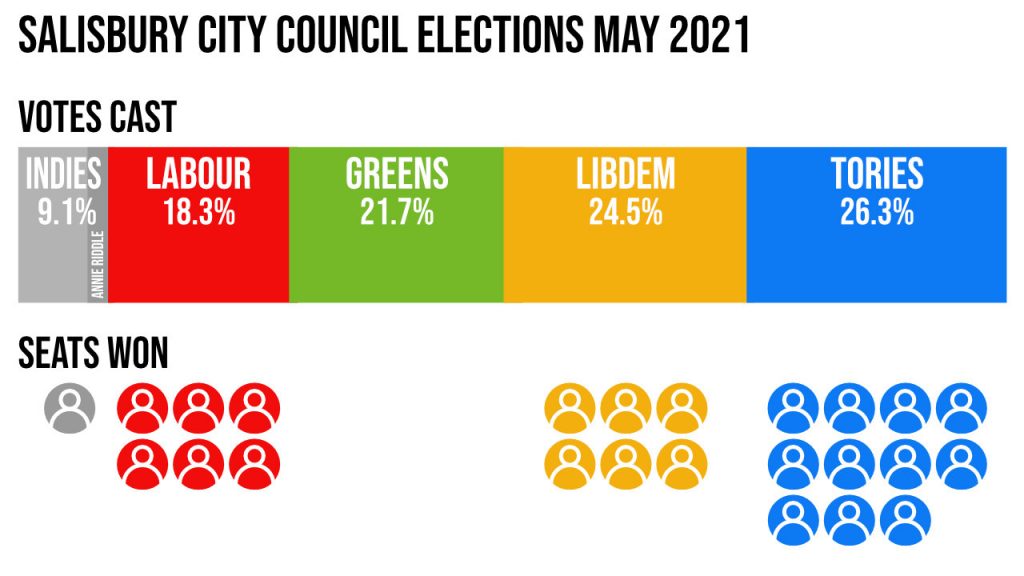 The dust has now settled on our local election campaign and I believe Salisbury Greens should be very proud of what we have collectively achieved.

Of course, it was bitter sweet in that we did not win a councillor in the City or Unitary elections, but this was always an outside chance for a small but growing party under the first-past-the-post electoral system. But we did gather a large volume of votes ...

Yes, we got more votes than Labour and is almost 22% of the Salisbury City council vote! It represents a huge uplift from 2017 when we had 10.40%.  Across South Wilts in the Unitary elections we had almost 12% of the vote. The electorate and the other parties will all be very aware now that Greens win substantial vote shares and run high profile campaigns. The message we have sent is that we are a serious party! We intend to use this substantial and collective Green voice to campaign and pressurise our councils.

In the Wiltshire Police and Crime Commissioners Election, which ran at the same time, Brig Oubridge, Green Party, received 16,606 votes. This was 8% of the vote.

The Green Party is celebrating the best local elections results in its history with more Green councillors on more councils across the country than ever before. Voters across the country have made clear their hope for a Greener future after the Covid pandemic.

The Greens have won a total of 155 seats, including 99 gains and gained representation on 18 new councils in this year’s local elections. It takes the total tally of councils with Green representation to 141.

In Bristol, Greens made 13 gains, more than doubling their number of councillors, winning 50% of the vote and are now the joint biggest in the city with Labour on 24 seats each.

Can Salisbury follow in the footsteps of Bristol Greens? We have created a great platform. But where do we go from here? Everything is up for review. The structure of meetings, expanding and actively involving more of the membership, getting the Green voice heard, running some active local campaigns, pressuring Salisbury City and Wiltshire Council, developing the website and social media, working alongside and to support Transition City and Wiltshire Climate Alliance and probably much more!

We want everyone to contribute their ideas and views. We want to capture the enthusiasm and commitment shown by the wider membership over the last couple of months. So we will be in touch again shortly to listen to your views and to take the Salisbury Greens forward.

Thank you for your part in the elections and your commitment to the Green Party.