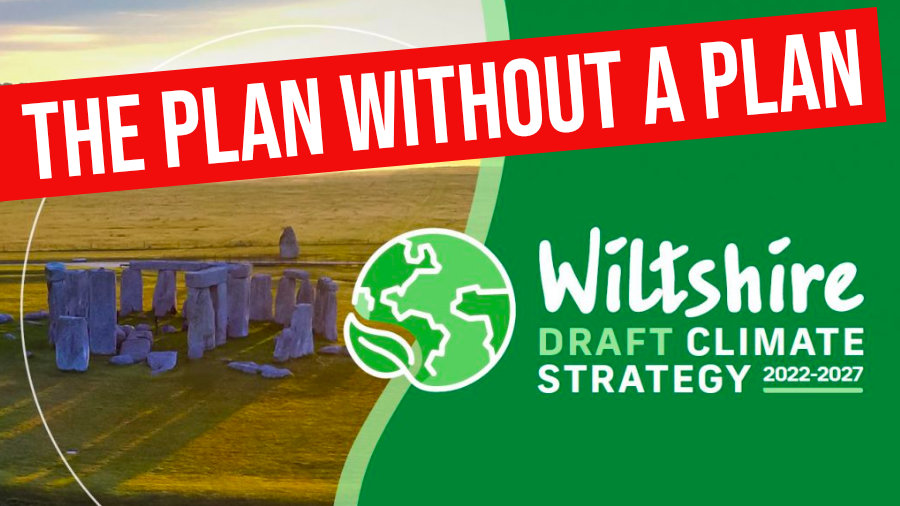 Wiltshire Council has published its long-awaited “strategy” for tackling climate change, two and a half years after recognising that we face a global climate emergency. Sadly, although it contains a lot of fine words, hopes and aspirations, and pays lip service to their stated aim of making the county carbon neutral by 2030, it actually reveals that they have no concrete plans and no real idea of how they are going to get there.

In 2015 the Paris climate summit (“COP 21”) adopted the target of limiting global temperature rises to 1 .5 degrees C. In 201 9 the United Nations Intergovernmental Panel on Climate Change (IPCC) told us that to hit this target we needed to cut CO2 emissions by 50% by 2030. Recognising that Britain, as the historic home of the Industrial Revolution, should be leading the way, Green councillors in Bristol introduced a climate emergency declaration, pledging their city to become zero-carbon by 2030, and Lib. Dem. councillors in Wiltshire followed the Green lead by proposing a similar declaration in Wiltshire in February 2020.

Although less than half of Wiltshire's Conservative councillors voted in favour of the declaration, it scraped through on opposition and independent votes and some Tory abstentions. Wiltshire's new Tory leader, Richard Clewer, has shown himself to be very good at talking the talk on climate change, but (beyond changing a few lightbulbs) equally good at explaining why things cannot be done, or not as fast as they need to be. Long-standing Conservative policies like support for more road building and the Westbury incinerator have remained unchanged despite their climate change implications.

With a quarter of the time between 2019 and 2030 already gone, and the next global climate summit, COP26 in Glasgow, now only weeks away, signs are not looking good. Despite a slight dip at the height of the pandemic, global emissions have continued to go up instead of down. Climate change is moving even faster than the IPCC predicted, and time is fast running out.

Wiltshire Council's new “strategy” contains no action plan, no timetable, and no milestones to show how it can be achieved. It is simply not good enough.

Wiltshire Council's climate strategy is open to public consultation until October 17th, and can be found at www.wiltshire.gov.uk. Please let them know what you think about it. A full analysis of the plan and help with the consultation are available at www.wiltshireclimatealliance.org.uk.